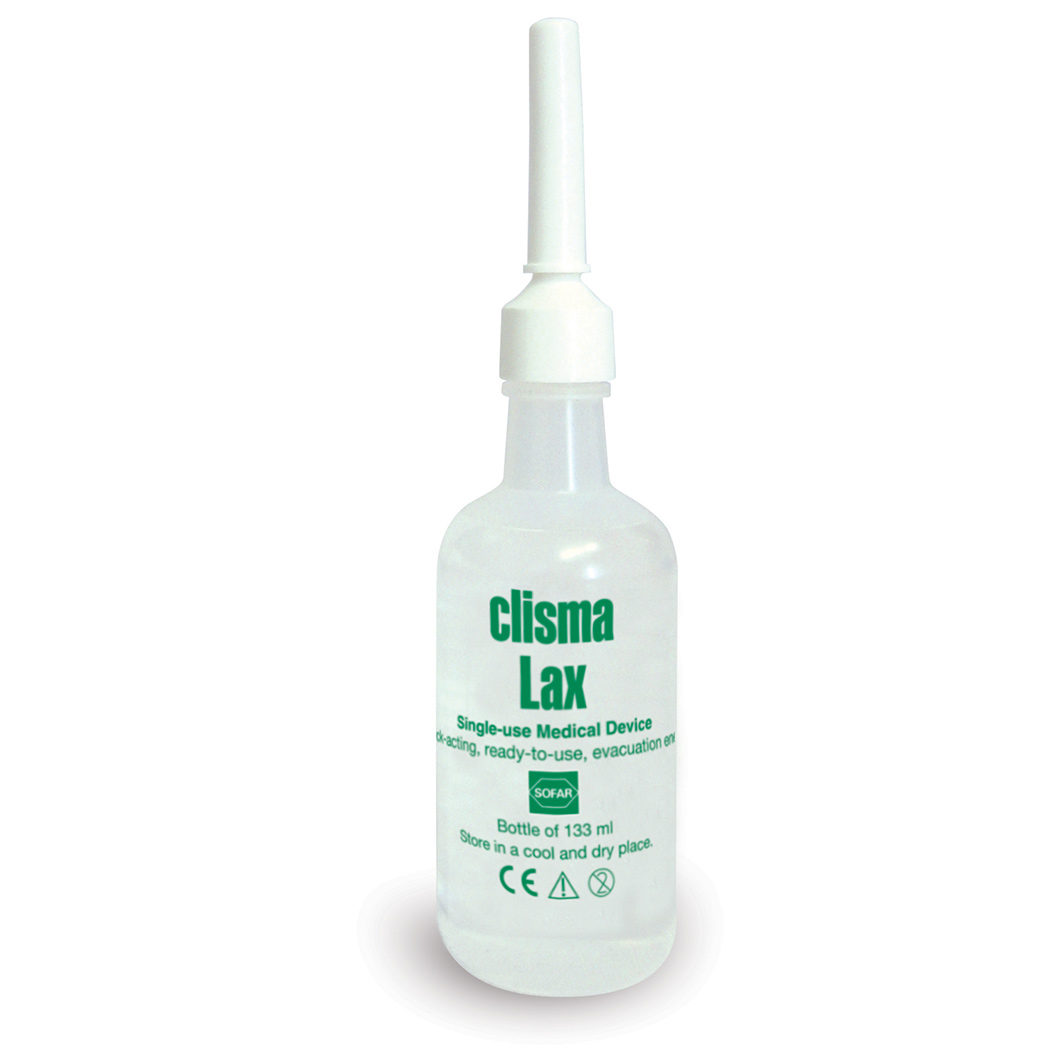 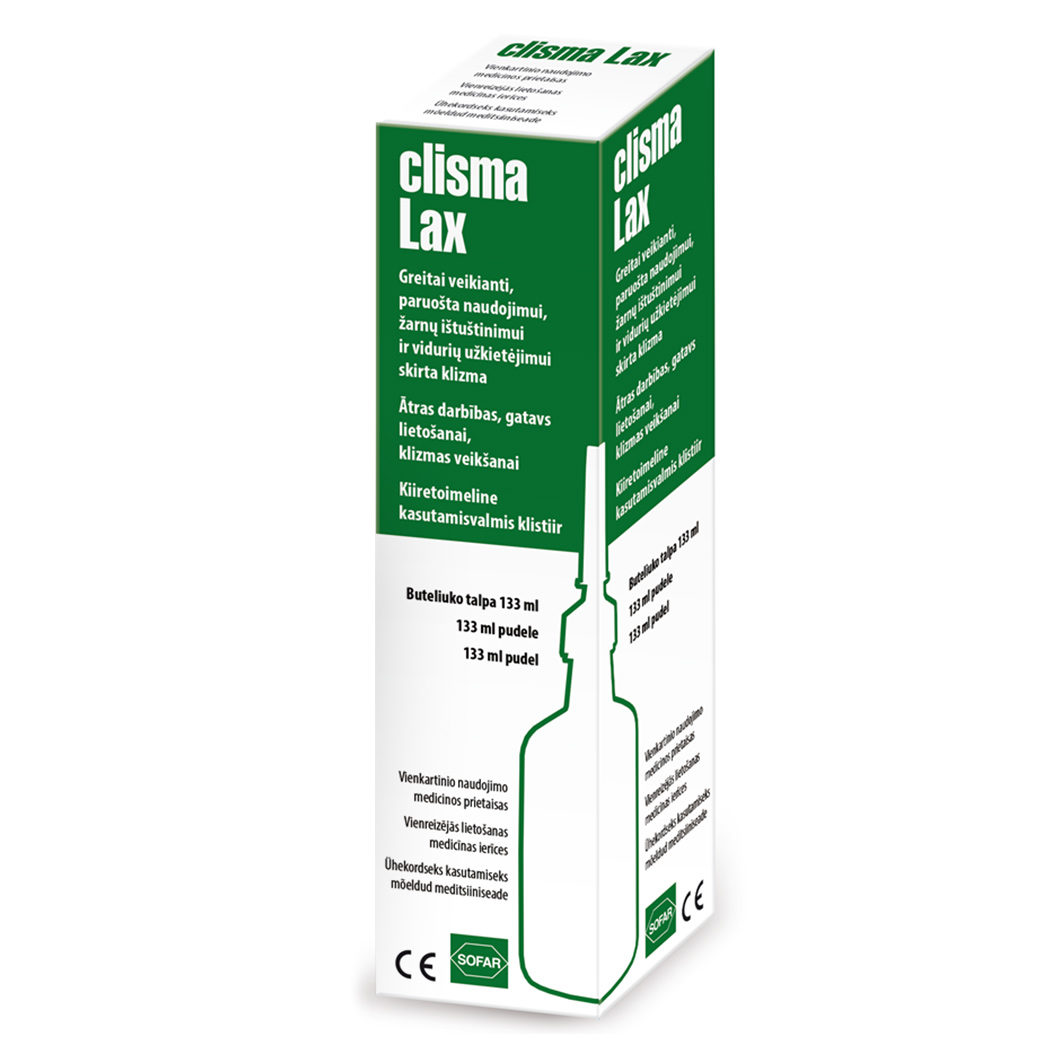 For bowel emptying and constipation

Does not injure
Ready to use
Fast acting

CLISMA-LAX is indicated in constipation and in evacuating the rectum priorto diagnostic, radiological, urological, gynecological and colonscopicexaminations.Adults and Children over 12 years old: 1 bottle (133 ml delivered dose) daily oras directed by a physician. For some particular clinical needs, up to 2-3 bottlescan be administered. Children aged 3 years to less than 12 years: ½ a bottle or as directed by aphysician. Do not administer to children under 3 years of age. CLISMA-LAXhelps treating constipation and irregular bowel movements but repeated andprolonged use of CLISMA-LAX Ready-to-Use Enema is not recommended asit may cause habituation.Unless indicated by a physician, enema should not beused for more than 7 days.

CLISMA-LAX is a medical device designed to practice lower bowel cleansingenemas in an easy, fast, safe and hygienic way; it is a ready-to-use device andits application does not require any additional device. CLISMA-LAX contains an aqueous saline solution and is formed of a handysoft plastic bottle that also has the function of delivery apparatus, provided witha lubricated atraumatic rectal cannula. Both the active saline solution contained in the bottle, and the bottle itself which isalso a tool of administration make CLISMA-LAX a ready-to-use device. Indeed,using CLISMA-LAX, evacuation enema is no more unpleasant and cumbersomeexperience. Its administration is highly fast, workable both at home and elsewhere,under conditions of high security and hygiene, without the discomfort, risks, costsand expenditure time of traditional methods.It comes in boxes of one or twenty bottles of 133 ml.

CLISMA-LAX contains a hyperosmotic solution of sodium phosphates,stabilized and buffered at Ph 5.5, widely used in US and Europe. Theevacuative effect of the solution is specifically mechanical and derives aboveall from its hyperosmotic property, which is a common feature of salinelaxatives. After introducing into the rectum, the solution recalls water byosmosis from the surrounding tissues, increasing the volume of the intestinalcontent. The increased volume boosts intestinal peristalsis in a smooth,effortless and nearly physiologic way.Ready-to-Use Enema is a bowel cleanser that acts by increasing the watercontent of your stools and in this way helps relieving constipation and clearingthe bowel. It can be used in the relief of occasional constipation and where bowelcleansing is required, such as prior to your endoscopy, bowel surgery or X-rayexamination, before and after lower bowel surgery, delivery and post partum,before proctoscopy, sigmoidoscopy or colonoscopy and mainly beforeradiological examinations of the lower bowel.Due to its quick and limited to-lower-bowel action, CLISMA-LAX is the preferredchoice especially in heart patients who need to evacuate effortlessly, paraplegicand some neurologic patients where oral laxatives are contraindicated.

Do not use CLISMA-LAX ready-to-use enema for long periods unless directedby a physician. Not to be used when nausea, vomiting or abdominal pain ispresent, in bowel obstruction or intestinal stenosis, rectal bleeding. Consult aphysician before using CLISMA-LAX in children under 12 and elderly ordebilitated. Use only if solution is clear, coloreless and correctly stored. Keepthis leaflet always available and ready to consult. 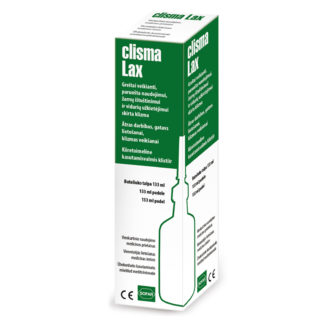